I'm still kicking, I promise! (edited pm to include picture!!)

I thought I should post a little bloggy-blog because a few of my sweet friends have called and emailed making sure everything was alright because of my absence from the cyber world, both here and on FB.

Sadly, I have no exciting or pregnancy related reason behind my absence, just a very dull mid-term exams and assignments one. I knew this quarter's classes were kicking me in the bum but studying for these big tests and then taking them - including the three solid hour long test - have taken it out of me more than I realised.

This is why school is for the young! Those who just come alive when the clock strikes 9pm, rather than those like me who see that as a signal for putting on pajamas and making a warm drink to get me to sleep.

It has given me a new inspiration for staying on top of things for the rest of the quarter so finals won't be such a headache. I guess you live and learn, hey?! So that is the extent of my week.

Ok, I gotta head - tonight we are going to a Twilight themed birthday party and having never seen the movies or read the books (yes, I am the ONE person left who is a Twilight virgin) I had to look up online what would be considered 'Bella' wear. There is a little degree of leniency and the options for dress up include Harry Potter and the Lord of the Rings, so Jeremy is currently seeking advice and opinion as he puts his Harry costume together!! I wanted to go as Hermione, but we only have one tie - and as it turns out, this Bella Swan chick wears plaid shirts and jeans which is almost too easy to be considered a costume, but I'll take it!

EDIT: Picture of J as Harry!! Bless him, he even loves me enough to let me draw a scar on his face. 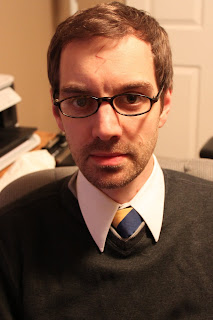