Apparently Levi took the "bring it on" from the end of my last post literally. We had a day of wonderful long naps yesterday but it meant that he was a little off kilter and took his last nap at about 4.45pm, I let him stay sleeping on me because I was happy for him not to get into a deep sleep so he would take a shorter nap and still go to bed at a reasonable hour. After about 30 minutes I started moving around and he woke up. I assumed that after this sleep he needed to stay awake for a while before he went down for the night but I think that was a mistake. he was still so sleepy I think we could have done our bedtime routine and put him down for the night between 6 and 6.30pm and he would have been out for the count. Instead, he was overtired by the time he was splashing around in the bathtub and having his final feed. He usually falls asleep nursing but last night he was WIDE awake. I rocked him and J watched him and after he went down around 8pm he was stirring and wriggling and obviously not comfortable or in a sound sleep.

His first stint was about 4.5 hours and that was the longest stretch. Boo. Then he was having a hard time settling every time I put him back to sleep.Yawn.

At 5.30pm when I put him back to sleep I heard him stirring before I had even left the room so I picked him up and brought him back into our bed. I was hoping I could nurse him while I was laying down so that I could catch a few more z's when he settled to sleep but alas he was grunty and gassy and sad, uncomfortable and tired, poor thing. Poor mummy. By around 6.30am he had grabbed a few still moments of sleep on and off and I was still awake. I heard Jeremy start to wake at the same time I felt Levi had peed through his jammies - the second pair that night - and I reached my limit. Defeated I pushed Levi across the bed to J and burst into tears. I mumbled something incoherent about having had no sleep and the baby being wet again and I rolled over and burried myself under the covers.

Usually Jeremy would have an objection to being woken so abruptly with orders but I think he felt the fatigue and despair in my sobs and swiftly removed our very (by this point) awake and chirpy baby boy from the bed to let me catch 30 minutes slumber before he had to get ready to leave for work. Those 30 minutes were not  all spent sleeping, it took a couple to drift off, but the 27 minutes of rest I did get were enough to get me out of the blubbering cover hiding and ready to parent for the day. Helped too by the tea and banana that J brought up for me before he left.

Levi was awake and super sweet for a while and then passed out and is now asleep in the bed next to me. 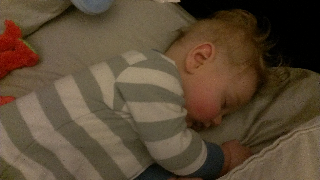 I want to sleep too but I am wide awake now. Of course. Biggest of bummers.

I am not wanting this blog to become a place to report our sleep successes and woes, I am hopeful and prayerful that they will become much less unpredictable and therefore blog worth soon, but for now I want to mke sure that when I talk about it I am giving a complete narrative and not just highlighting the better days.

I am not sure how to cope with the poor sleep when it feels like his gas is really the culprit in making him so unsettled. He just wants to nurse for comfort and I have nothing else to offer so I let him.

Even with the sleep deprivation of today I am excited for the day. It snowed over night and while I don't want to be outside in the freezing temps for too long with the baby I am excited to have planned a little walk to get coffee with a friend and her sweet month old baby girl later this morning. I am not even sure the snow will still be there by then but the glimmer of the white on the ground is the most beautiful thing to wake up to...even when you are waking up still sleepy!