I have never been a natural early riser. I can get up and find a good attitude pretty quickly, but left to my own devices I would still be in the land of nod well past anything socially acceptable. Before Levi, Jeremy and I regularly started out weekends at 11am on a Saturday.

Parenthood has changed all that.

Levi is an early riser. When he sleeps through the night he can go 6.30pm-6.30am but recently both pieces of that sentence have been irregular. He is sleeping through much more frequently than he was a few weeks ago but since daylight savings, he is going to sleep better 6.30 and 7pm, which is 7.30 to 8pm as was. However, instead of sleeping to 6.15 or 6.30am like the routine we had come to know, he is waking between 5.30 and 6am -YAWN!! Oh my goodness, its painful. He went through a 5.30am wake up period for about a month this summer and it was rough, but because he was sleeping through consistently and taking 2 naps I could catch up on my sleep at one of his naps times during the day and we made it work. Now with him down to one nap a day and with it being inconsistent in length, as well as very inconsistent sleeping through the night I am exhausted with these early starts.

I'm so thankful that Jeremy is prepared to take on half the burden. He understands that pregnancy and watching a toddler all day is just as tiring as his job.

We used to take turns to get up with Levi and take him downstairs so the other one could go back to sleep. In more recent times, we have recognised that a) its really almost impossible to go back to sleep when you only have another 45 minutes to sleep and b) Levi may well fall back asleep after his bottle if we stay in the dark and quiet of our bedroom, so we have taken to bringing him in with us for bottle and snuggles. He sometimes falls back asleep for up to an hour.

If he doesn't go back to sleep he will often snuggle quietly for a while before starting to chatter and wanting to play. We have embraced these family times even though they are early because we realise we don't have that many of them. Levi's early to bed means little time together in the evenings so the morning adds some more quality time for our family.

Levi starts talking right away about football and touch downs, but quickly moves to climbing over Jeremy to get to his night stand and reaching to turn on the clock radio for music and "dancin' He then shakes his little bum ad wiggles and waves his arms like its a party. Our time continues with him walking around our room wearing our shoes - he's ust figured out how to keep them on his feet as he walks and he proudly clomps around.

He has become quite the towel boy and I genuinely miss his service when there is no one to pass me my towel as I step out of the shower! He also enjoys his turn with our electric toothbrush and my hairbrush. He has become very skilled at climbing in and out of the bathtub unassisted and so he can often be found playing in there while we get ready.

It means I am often out running errands or starting playdates with other mums of early risers earlier in my day than I would have anticipated but it can help me to start the day productively. It often kick starts the rest of the day too which is a good thing. I am often pretty useless by about 3 or 4 pm but by then, Levi is quite content to be home and playing with his toys, or reading stories with me until dinner so I can hang out primarily on the couch without much guilt.

Parenting is all about rolling with the punches, and an adjusted schedule is only the tip of the iceberg, but its one I am finding the silver lining to. I mean, who wouldn't be happy to get up to this smiling face? :) 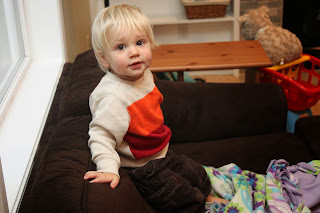