One of the things I have enjoyed most about keeping house is cooking. I love my kitchen, and feel very at home there. Even doing dishes can be fun. We haven't decorated in our kitchen since we got the house (it's on the list!) but I have made it a special place, I have lots of plants around because I love them, as well as some family pictures - and fresh flowers as much as possible! I love being in the kitchen and I want others to enjoy spending time there too. We just bought some bar stools which has made it easier for others to join me as I cook!

Easter was a few weeks ago and I thought it called for something a bit special on the food front. We were spending the day with Jeremy's family and his mom, sister and I had come up with a menu and divided up who would bring what. I was excited that one of the things on my list was dessert.

So I turned to Cooking Light, my culinary bible for inspiration! Lo and Behold, this months edition has a Fresh Coconut cake recipe - done and done.

I like to push myself a little bit when it comes to using new ingredients and I have never had to open a real coconut for a recipe so I was up for the challenge. I set Jeremy the task of piercing the three eyelet holes and draining the water (which I used in the batter). He took it out to the garage and put it in the vice, which worked a treat! Then we baked it for a half hour before we smashed it open and got the flesh out. We shaved it and I toasted the shavings.

It was pretty involved and not something I would just whip up for Tuesday dinner but it was delicious. It turned into a team effort and Jeremy and I were up pretty late the night before Easter making the frosting and putting it all together. I think you can see the clock in the background of some of the pictures, and yes we are wearing our PJ's! 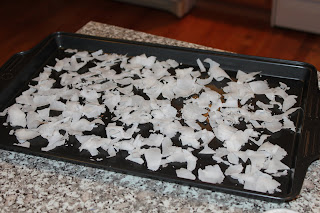 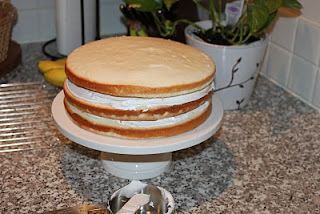 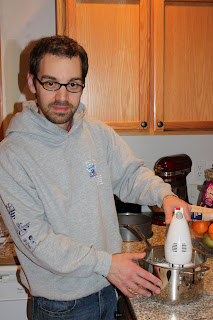 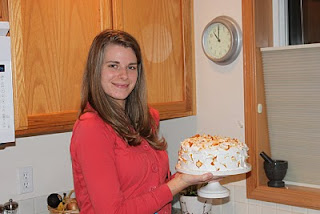