Camping with a Baby

Last week there was a long weekend here celebrating American Independence Day. We decided to take Levi camping for the first time. J had bought us a new tent and was eager to try it out. We needed something big enough for us and for the pack and play for Levi to sleep in and our new turned out to be perfect!

Camping trips used to mean sitting around reading and playing cards, and not much of that happened this time with Levi around :) He was into everything, walking around the campsite exploring. He was fascinated by being outside and with all the trees and the tent and he loved that there were so many dogs with their owners around too, and he perfected his royal wave just in time for our trip and used it to charm the all the other campers!!

Levi had a hard time settling at night, mostly because it was so light in the tent and he usually goes to bed between 6.30 and 7pm when it is still very bright and sunny without the blackout curtains he has in his bedroom, so he had a  couple of late nights settling around 9pm. J and I made a fire and let him settle himself in the pack and play in the tent while we roasted s'mores or hotdogs. We still had some good evening time together but we were taking turns trying to rock and settle the baby too :)

The first night was July 4th and we were staying on a camp site on a reservation - where fireworks are not illegal like they are in many cities except for formal displays - and we hadn't thought that through. I swear it felt like we were in a war zone! Huge booms going off all through the night. Thankfully it kept J and I awake more than it bothered Levi, who once he was asleep slept through undisturbed until 5am. The tent get light with the sun and Levi was up. Jeremy decided to get up with him and take him out to play  (Yes, I married well, I know it!) and I woke up a few hours later and looked over to see Levi taking his nap snuggled in the pack and play. I didn't even hear them come back inside but I so appreciated the extra z's!

After Levi woke and I got up and dressed we headed out to La Conner, the little town nearby.In the afternoon we came back to hang out at the family center lodge on the camp site where we watched the Mariner game and Levi ran off some energy and made lots of new friends with some of the older campers!

The next night was better, and there were hardly ay fireworks! We all went to sleep at good time despite the obnoxiously loud campers who pitched their tent in the site next to ours and were constantly getting thing from their car which they didn't seem to be able to do without slamming the doors and then making the lock beep...over and over, to well passed midnight. This only seemed to bother me to the point of waking me up but Levi was stirring a lot too. I lost my cool at one point and very loudly shusshed them from my bed. I know they heard me, because they shut up...at least for a few minutes - and at that moment I had decided that if Levi was up bright and very early, I would encourage him play with all the musical toys we had brought. Don't mess with this mama, Campers.[I never got that opportunity in the end]

At about 6.30am we woke up to Levi standing in his pack and play looking over at us, so we got him and snuggled him in bed with us because by that time, it was actually pretty chilly in the tent. I think he might have been cold because he is not really a snuggler anymore but on that day he snuggled in and without really making much of a sound, his eyes blinking hard, he snuggled down and before we knew it he was back asleep. J and I looked at each other and smiled as we turned over ourselves and went back to sleep. We all slept another couple of hours, it was blissful!! And I just loved waking up all snuggled together. I wish I would have thought to take a selfie pic of all of us just lying there in our camping glory. It was certainly my favourite moment of the whole trip.

All in all the trip was a sweet time for us as a family. It was busy, but life with our little guy is busy wherever we are :) We found playgrounds and played in the sunshine, we ate meals out, we threw rocks into the water at the beach, took walks, and generally just enjoyed our time together. Levi certainly appreciated all the Daddy time he got over the weekend and waving "bub ba" to Daddy on Monday morning when he left fro work was quite dramatic as he realised that Daddy was leaving and he was staying. Broke my heart a little to see him sad like that but it made me understand even more he importance of spending time as a family and especially for Levi and Jeremy to get good guy bonding time.

J loves to camp and be outdoors and I can already tell Levi has inherited that love. I am the homebody, but I'll go along for the ride with my boys. I'm looking forward to many more camping adventures in our new tent and I look forward to all the memories we will make over the years. 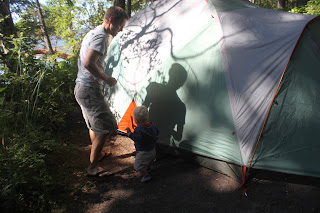 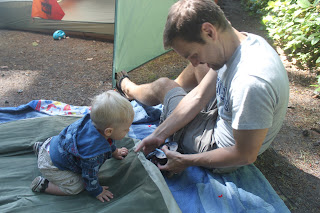 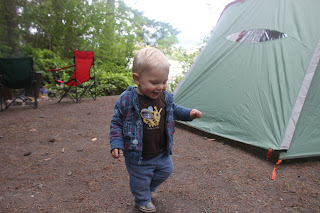