Getting more sparkly around here...

A few weeks ago we took a new blood test that actually takes genetic material from the baby (crazy?!) and then today we had our 19 week scan which only served to confirm what the blood work told us...we are having a little GIRL!! Levi is going to have a baby sister!!

It's about to get a lot more sparkly around here, not to mention the influx of pink that I am sure she is about to happen. I'm not complaining, in fact, it's the opposite. I m thrilled.

I think it will take some time to really get used to the idea, but it's one that I am more than willing to get used to this idea!

[In other (almost as exciting) news Levi remembered how to sleep through the night again last night and in fine form he slept 6.20pm - 6.20am. Not a peep in between. It was so blissful and I was so tired that I slept right through, not even getting up to pee which is why when I finally did wake up my bladder was about to burst! I am not sure if it had anything to do with the amber teething necklace that he wore all day yesterday and slept in, but I'm not willing to take it off him to find out - plus it looks cute on him and doesn't seem to bother him at all.]

Here is just a little shot of Levi happily shopping for his little sister :) 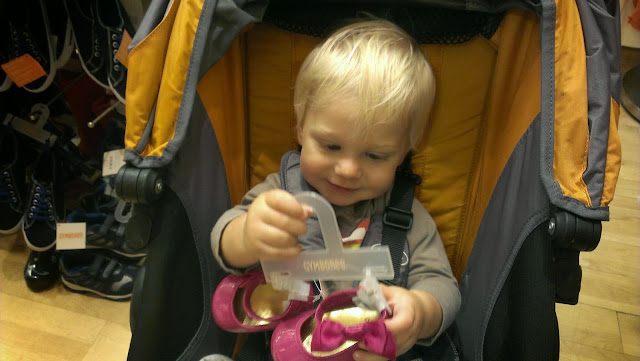