There is nothing like declaring a new start to set satan coming at you in a big way. Some people might call it Sod's law, or simply coincidence, but I call it like I see it. The work of the enemy; eager to rail road any steps I am taking towards a stronger and more vibrant relationship with my God.

My resolve was so strong. Be available for God. Spend time in His word daily - make the time! Let my actions speak louder than my words.

By 6pm the headache that had been lingering all day was in a full out rage. I'm not sure if it was a result of dehydration because I had been terrible at drinking water for a couple of days and nursing a ton, or if it had something to do with the wisdom tooth that has suddenly decided to start cutting but either way it was painful and freaking me out. The voice in my head was telling me it was the start of the brain tumor diagnosis which would swiftly end my life and leave my babies motherless.

As my headache worsened, Levi who had been a little drippy (teething, maybe?) through the afternoon became lethargic and almost fell asleep in his high chair at the dinner table having refused anything except his milk. His low grade fever confirmed he wasn't feeling 100%. We put him to bed early and while he slept through most of the night he was awake a few times just talking in his crib with a few mews of "hold you mummy, hold you daddy" thrown in there to perk my hearing and alertness before he would drift back to sleep.

He and Nora seemed to be tag-teaming through the night. He would wake up and just as I was settling back to sleep, she'd wake up and need attention. She only nursed a couple of times but she had the worst gas and copious amounts of poop keeping her from settling.
Add the intense throbbing and pressure that would not let me find a comfortable position and I got next to no sleep.

In the morning we had a playdate planned but as I was getting ready to go, I started to feel lightheaded and woozie - not safe to drive with my precious cargo. The older of whom was still ever so emotional. I was fighting to make it work but in the end I gave in and called to cancel. Sad. I was looking forward to having somewhere to go and I know Levi would have loved the new space and the company of other kiddos.

It ended up being a great morning in spite of it all.

My headache subsided and even the dizziness passed. Nora took a good long nap leaving Levi and I to play and even plant out a hydrangea that had been given to us which he loved of course, any excuse to dig and get muddy outside.

It was a simple, slow, low key day. We laughed, and snuggled and enjoyed each others company. Here we are cuddled up for an episode of Bob the builder while we wait for Daddy to get home. 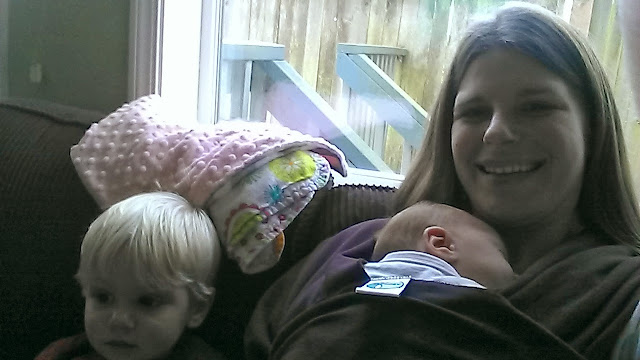 It's now just after 9pm. I am heading up to take a shower after I pack the diaper bag for our early start tomorrow. And then I will spend my time with the Lord. It's not perfect but it's day one so take that Monday you don't have me beat yet!
Posted by Chrissie at 9:07 PM