Levi is napping, he slept so well last night waking up bright and cheerful at 7am (possibly because he had slept so badly the past two nights). This meant that even after playing hard in the nursery at church, including charming the new volunteer as well as giving some love to his faves and looking cute as pie in his festive attire, not to mention a stop at Target on the way home to pick up a copy of our Christmas picture to go in the frame in our hallway, he didn't fall asleep until almost 1pm - an hour and a half later than usual!! He went down fine and truth be told I would love it if his nap moved to this time so it's nice to see what life might be like with a full nights sleep, a descent wake up time, a full morning of play and a great afternoon nap :)

Just made some lunch and am watching the Seahawks vs. the 49ers while I eat before starting some serious revision fro my final tomorrow. Prayers for the math to stay in my brain for at least the next 24 hours would be really appreciated!! Here I come, lines and inequalities to graph - not hiding from em now!

For church I put Levi in a darling and festive ourfit, pieces of which we were loaned by friends and then a red sweater vest I picked up in the Old Navy sales. Perfection.  And wise :) Note that the word of today is WISDOM - It was not the Seahawk outfit that would have been adorned if Daddy had not already left for a business trip when you got dressed :) However, I will make sure that Levi is representing the 12th man when he wakes up. And as Levi's little buddy Jonah says, "Go Hawks!" 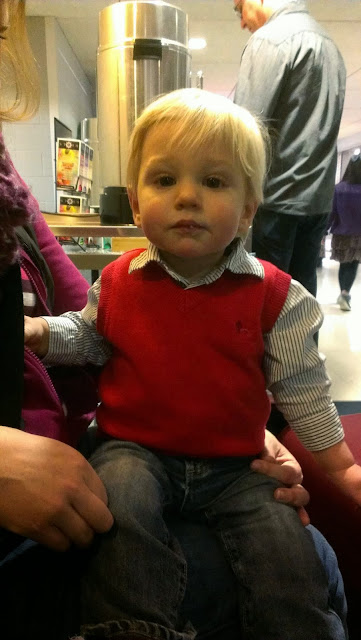 I feel as though I have been living my life very much in the shadow of school the past few months. I have thought, "when school is over I will start arranging to have people over again" or, "when school is over I will get back on top of keeping the house in order", when when school is out I will work on Levi's sleep/getting rid of Levi's bottle/reducing Levi's milk intake etc". You get the point. I feel a burden of guilt and a little despair that I haven't found a way to do  life well and still find time to study and get the grade I need - I see people all around me doing it, yet I struggle with a sensation of feeling almost paralyzed with the weight of an overwhelming "to do" list.

So now we are here, in less than 24 hours I will be done for the quarter. And I am looking ahead to how in the world I am going to take my last three classes with not one but two babies to take care of, and how can I make changes to make school more than a burden, and something that doesn't take so much away from my family because honestly, the quarters I have been in school since having Levi have been the driest times in our marriage in pretty much every way. We survive but we have some rebuilding and reconnecting to do once finals are over. I don't want it to be like that in the future.

I originally planned to take just one quarter off to have our baby girl, and bite the bullet to start back in class for Spring quarter...after talking about it with Jeremy I am starting to see that for the sake of myself, and my family, I need to take more time. There is no rush. I have time to get these credits but I cannot get back these early months and years with our children. I can't get a redo as their early understanding of the world forms. I want to enjoy, to be present and to have them grow up in a place of community where they have other adults that they see often and who know and love them. School just got pushed out of my priority list, I starting tomorrow, I will take a whole year off to fully embrace all there is to being a wife and a mum. It's like the best Christmas present and its coming early -  I might not sleep tonight!