First snow of the winter (almost)

So technically it's not winter until tomorrow but I think this can count :)

Yesterday I had thought I had heard that it might snow, I had wanted to check the weather before going to bed but it slipped my mind, so this morning when Jeremy got up to get Levi's bottle and eagerly reported that it had snowed I was so excited. A special festive surprise.

We only had about an inch on the ground at the time and although it was still falling it wasn't cold enough for it to stay around for long. It felt like a lot of effort to get Levi ready for snow play - especially since I didn't think wither of us would be up for staying outside for very long, but I knew I would kick myself if I let my own lack of enthusiasm for snow play get in the way of seeing Levi's face when he was out there.

So we found the snow boots (that I am so glad I picked up for a steal at the consignment sale this fall) Put them on over his onesie PJ's and topped it of with his fleece and a waterproof jacket as well as his heavy duty hat. He does have little mittens but they are not his favourite thing in the world and they are woolen so once he touched anything they would be wet anyway so we skipped those. He has grown into the boots at the perfect time and he was really steady on his feet even when the ground was slippery or the snow covered grass was uneven.

It was 8am or a little before and we were having our snow adventure :)

I had wondered if he would be timid because the get-up he was wearing might be uncomfortable or if he was hot or cold but he LOVED every second and kept "running" all over the place. i had to keep grabbing before he headed off our front lawn and onto the street. Everything was covered in snow so you couldn't easily see where the end was - not that I think he would have cared anyway, running away is one of his newest favourite games and its often accompanied by him yelling, "no, no, no, no" his new favourite word :) He is 16 months and he's really good at it :)

So it's now afternoon and the snow has pretty much gone. Now we know how much our little snow bunny loves the white stuff we may have to plan a trip to the mountains this holiday break so we can introduce him to the sled. 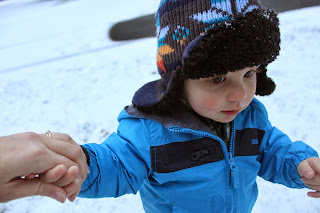 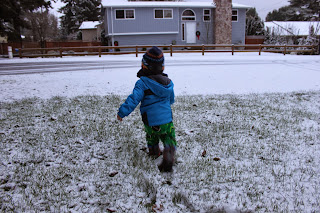