That is how I would describe Levi recently. He has certainly turned a corner where he is "speaking" more. He has many more words that are becoming clearer but he is also using his signs to tel us what he wants - sometimes what he needs, but mostly just what he wants :)

We have moved into the stags of running away crying and throwing himself on the floor when he is told no, ir when we take something away from him that he wants. We have child locks on lots of drawers and cupboards but he still likes to explore and as he gets taller and more skilled he goes beyond our childproofing efforts and gets into all sorts of things. Its a tough balance and I struggle to know where to draw a line between wanting to teach him to hear and understand the word "no", and the reality that if we didn't have any child locks it would take hours to get ready in the morning not to mention having the extra help to keep him protected from the things that are in some of our cupboards. He has just learned to open flip lids on containers like sunscreen so its a while new world of crazy when he gets into some cupboards.

We went to the zoo this morning with the other mums from my MOPS table and all their kids. It is certainly a boy heavy crowd, with just one little lady in amongst all the boys. Levi loves all the big kids and he has such an adventurous spirit that playing all together in the playgrounds he wants to do everything they are doing. Its kinda of exhausting to watch him but he just has the biggest smile on his face its worth it :)

It's certainly not easy to parent him out and about any more because he is so busy and wants to be active beyond his skill level! I am feeling like Jeremy and I need to regroup and discuss strategy. I am not someone to shy away from saying no in public at the risk of a major toddler melt down. I am happy to do what it takes to give Levi opportunities to explore the world but I am just as if not more eager to teach him boundaries, to be obedient and be a good listener.

I want to pull out "The wonder of Boys" and read over it again as it related to early discipline, and I also heard about another book on the radio station this morning that sounded interesting, not sure when I am going to get to all this reading, though :)

So as of today, life parenting Levi is fun and infuriating...and Levi himself is the same. At the zoo this morning, Levi was all over the place following the big kids and not happy about being in the stroller for any length of time but he was also super cute saying "ni ni" (night, night) to the sleeping "bow bear" (brown bears) and making fishy faces at the fish, and squealing with delight as the penguins swam by. He was also really taken by the cute otter statues in the exhibit, hugging them and even picking their noses!! (Boys!) 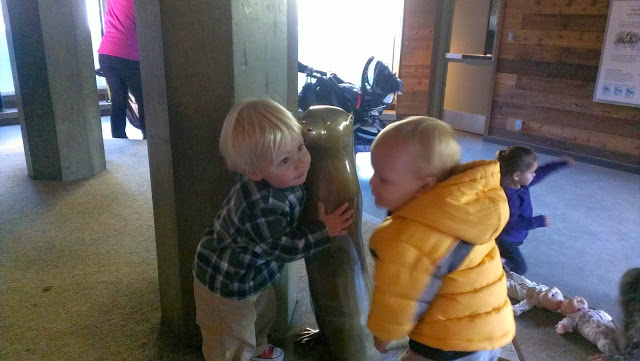 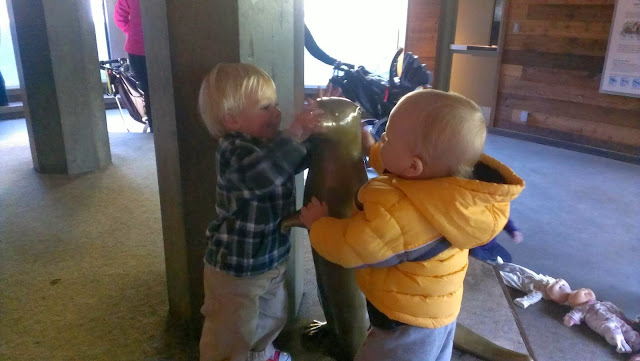