Thank you faithful blog followers and readers - you have been so gracious to my self-indulgent and some what grumpy posts over the past few days.Your reward will come, like mine when there posts are filled with adorable baby pictures and humorous tales of J being peed and pooped on! Just to give you a little update from our tests today - The fluid ultra sound looked great, and the sonographer confirmed baby is head down but commented that he was moving around a lot for such a big baby - no kidding! As we left, he said, "Everything looks great, he's ready to come out" Apparently, this poor fella has not worked with many over due pregnant ladies because that's fighting talk. He may have said those words without any bad intentions, but the fact my waters hadn't broken by the time we got back to the parking lot was very disappointing and I proceeded to deduce that it was simply a statement that our baby was big enough to come anytime rather than a secret message that he saw an indication bubs was heading out in the next ten minutes! Clutching at straws here people!

Once we got home, we had a couple of hours before heading to the hospital for the non-stress test. I think it's funny that that is the name of the test. Pretty sure from all the floating around in the fluid, cocktail in hand, not a care in the world that the babe is doing it's safe to say he isn't stressed at all. Mama on the other had could really use a drink to make it until 'd' day.

We wandered over to the hospital and waddled into the childbirth center - oh how I long for the day we do that and leave with out baby on the outside!! Here I am hooked up to the monitor. It took little longer than average because baby was sleeping when we first arrived. They wanted him to be moving more, and of course after a little while when he woe up he was back to moving all over just like his usual wriggly self. Everything looked great and it was exciting to see the waves of contractions coming on the monitor. While I only felt a few of the ones that it recorded it gave us hope to hear how hopeful the nurse and my doctor were that something might happen by itself and in the not too distant future! 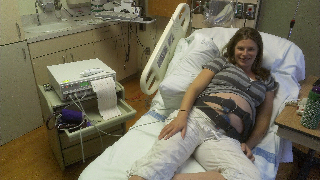 We have to go back on Friday morning for another non-stress test and depending ont hat result we will make more definite induction plans. For now, he's happy and I am coping so we are leaving him in there a little longer, and keeping the ball in his court as to when he shows up.
Posted by Chrissie at 3:23 PM