What a difference a day makes...

I just laughed out loud reading through my post from Friday. Little did I know that our baby boy was indeed out to prove his cranky and impatient mother wrong. At about 5.30pm that night (Friday) what had been uncomfortable tightenings became much more uncomfortable. Dare I say painful? I had no idea what contractions would actually feel like, but on this side of it I am recognising I may well have been in early labour for a day or so without really realising it.

Anyway, in the early evening contractions started coming more consistently. I tried to take a nap but couldn't because the pain level and frequency ramped up pretty quick once it got going. At around 8pm we began to time what seemed like 'real contractions' (They seriously just felt like period cramps) and were surprised to see that they were coming every 3 minutes and lasting about a minute.

What about those 15 minute contractions that are supposed to warn you of impending labour? Not sure what happened to those.

By about 10pm they were strong enough that I had to be bouncing on my birthing ball and deep breathing. We called our doula and she headed to the house. We laboured there with the birth ball, and massage for another couple of hours before heading to the hospital - also around 10ish I thought my waters had broken so when we called my doctor she told us to head into the hospital soon. They were not overly concerned that we went straight in so we felt ok about staying home as long as I could handle it. As we were loading up the car to drive to the hospital another gush flooded and at that point there was no denying it, there went the waters. We were having a baby.

The hospital staff were amazing. We were the only labouring family on the ward that night! We were also very fortunate to get one of the larger rooms which has a jaccuzzi tub in the en suite bathroom. I certainly made the most of that for a couple of hours during labour!

Back to the story - we got to the hospital around 1am and were on the monitor for about 30 minutes to check me and the baby. It was actually very reassuring to hear his little hearbeat constant and strong, beating away.

After the monitoring, we used the birth ball in a different position, some lunging and the warm tub to help me breath through contractions. Our doula was amazing and kept me focussed. In the wee hours of the morning when even the hot water was not helping to offer any relief, the contractions were coming one after another, after another with little break in between and I was getting tired. While in the tub at around 7am I decided that I wanted the help of an epidural. I knew I needed sleep and I knew that we still had a long time to go in labour because I was only 4cm dilated.

The anesthesiologist worked his magic and in about 10 minutes from start to finish my pain was gone. I still had a good amount of feeling in my legs but nothing in my pelvis. Once the epidural was in I tried to get some rest, I was in bed from this point and on the monitors which was totally a God thing because the nursing staff were able to see that there was a pattern of baby's heart rate decreasing with my contractions. They tried to add more fluid into my uterus to see if that cushion would help him, and they had me move into many different positions over a few hours but pretty quickly they realised that this could be a big problem.

The doctor talked to us around noon about the fact that his heart rate was something she didn't want to leave too long like it was. We had been trying for hours to get him more comfortable but he was just not responding. I told her in no uncertain terms our only goal was to leave the hospital with a healthy baby and the decision for c-setion was made. We were in the theater at 12.30pm and he was born at 12.38pm.

Honestly, I was quite out of it from the different pain medications but poor Jeremy who was already in shell shock about the speed of getting into surgery had to watch them try to get the baby to breathe. Apparently he thought that was optional at first and so there was a scary few minutes of a blue quiet baby before they cleared his lungs, gave him oxygen and he let out a glorious scream. He  weighed 8lb 11oz and was 21 1/2 inches long and was born with a head-full of blonde curls.

I was a little stoned from all the meds so the afternoon passed in a blur of wonderfulness. Friend and family came to visit, I got to snuggle and breastfeed my baby boy, and Jeremy and I were in awe of all that God has done in our lives.

We had a wonderful birth experience in spite of all the unexpected events. It was our perfect ending...and our perfect beginning as a family. Here are just a few pics so you can see how cute our little man is.

Welcome to the world Levi - we love you so much. 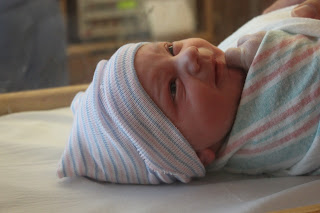 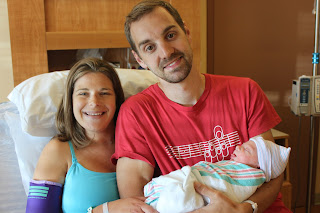 (Above) Family pic - I am still about out of it from the medicine, can you tell?
(Below) First hair wash. Not quite sure what to think! 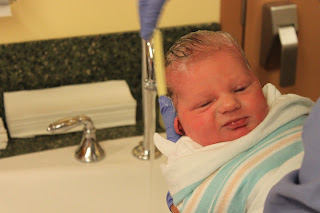 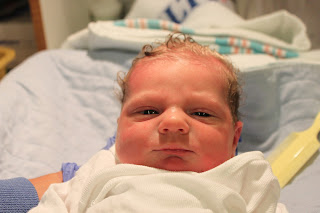 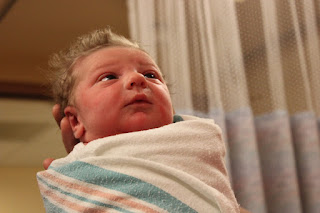