The morning was great, went to church, nothing out of the usual, and then we stopped at the grocery store on the way home. There was a car show and rummage sale in the parking lot next to the store so we wandered around before getting our food for the week.

By the time we actually got home my feet were a little swollen and my stomach was even more so. I think if I had filmed my belly at that moment, you could have literally seen it swelling. Crazy. I was suddenly exhausted and was thankful the Mariners were on TV to keep J company and distracted until I felt well enough to get up and go out somewhere to enjoy the spring sunshine.

So stopping at Starbucks for a Happy Hour Frappuccino, we headed to Edmonds and laid our blanket out on the sandy beach. We took out our books and apart from frequent trips to the loo for me, we stayed put for the next few hours until the tide began to get a little close for comfort!

Feeling ever so huge and uncomfortable I didn't fancy going out to dinner, despite J's invitation so instead we stopped for Ivor's fish and chips on the way home. Once back at home I found my way back to the couch and have been here pretty much.

Since the end of our first trimester, when the nausea faded an the ftigue lessened I have honestly been feeling pretty good. I have had to deal with some sciatic nerve pain here and there but its more annoying than anything. So today, feeling just so stretched out and uncomfortable, and so very, very tired after such a small amount of exertion was a little bit f a shock t the system. So far, it's pretty much been business as usual.

I have definitely moved into the season where it takes 2 or 3 motions before I can haul myself off the couch or out of the car but that felt like a right of passage on some level! I am hoping that baby boy was just having a growth spurt or something and today I will not feel quite so impaired. 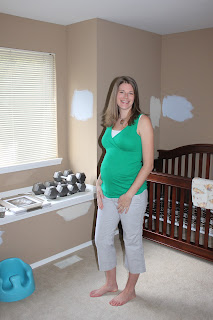 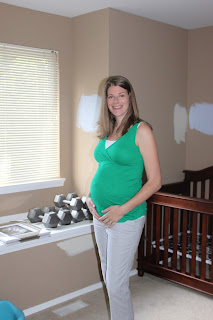 Here are a couple of snaps from yesterday, 27 weeks 3 days. As you can see in the background the nursery is still a work in progress. Paint samples on the walls, and bench weights waiting to have a new home found for them! Still it captures the moment well.
Posted by Chrissie at 8:22 AM