Prrretty sure that this is a repeat recipe, but it's so good it's worth another mention. Plus, this time we actually made it with pizza dough and not store bought flatbread crusts, so that's different, right?

We went to a pizza party last year with some people from J's work. The pizza was amazing, but the tips we gleaned from the guys in charge of the making were fabulous too, one of them even has a brick pizza oven in his backyard and is quite the pizza expert. I imagine in warmer climates men stand around the BBQ and discuss grilling technique, tips, personal recipes etc, but this felt like the wetter Seattle version as they stood around and discussed pizza making!

There were also gadgets which of course kept the guys occupied. Who knew that there were so many kitchen gadgets that could keep the men folk occupied? I should rephrase, gadgets that could keep my particular man interested. So for Christmas J wanted a pizza peel (the flat handled board that you use to transfer the pizza dough onto the pizza stone which is heating in the oven). My parents got him the peel but he lovingly held off making pizza because I wasn't eating any gluten early in this pregnancy (to see if it helped - I don't know if it was a factor, but after the first trimester the effects were not going to make a difference anyway and I slowly began to reintroduce it to my diet).  So now, my diet is back to normal, regular scheduled programming and all that and high on the list of foods to reintroduce to our weekly menus was homemade pizza.

And tonight was the night!

Here are a few snaps from our pizza-making adventure. 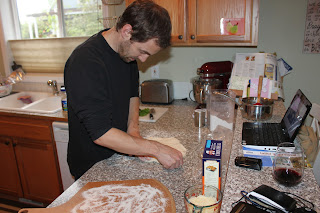 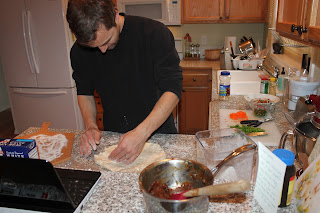 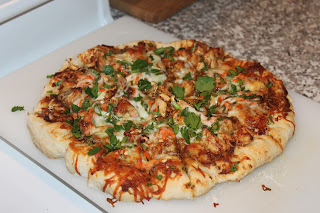